SO Sorry its been a while but Workload and a trip to the Irish open have kept me really occupied!

As most will be aware I went out to Portrush in Northern Ireland to the Irish Open Golf Championship to do my best to get the signatures on the Commissioned painting we had done by Mark Robinson in Dubai earlier in the Year,

Little did I know that we would be storing the flightcase in the Rules Office where all cards are checked in by all the tour Players etc,
As I was unloading it from the car there where alot of players still around, Jose Maria Olazabal, John Daly, Padraig Harrington to name a few, all showing an interest!

anyhow back to reality, My Wife Becky and I left and headed into Portrush Town Centre to our Hotel,

Wednesday I’m awake at 5am, ready for the 1 mile strole to the golf club to collect my Painting to start my search for the Players later that day, what a surprize when I walk to the main entrance to gain access through the players area that Emma who works for the European Tour Championship handed me a Contractors wristband which gave me access all area’s except inside the locker room, you can image my reaction! straight in to get my painting and it was so obvious that I was going to stand at the entrance to the locker room, there was cover if it rained for a start! also all the players would be heading that way at some point,

Within 30 mins I was Greeted By Gmac (Graeme McDowell – see photo) what an amazing Guy, Loved the painting, signed it and wished me all the best for the rest of the signatures and also for the Charity in General

It all want a bit quiet in my hunt for Rory Mcilroy & Darren Clarke, they were not teeing off till after lunch, I put the painting away for a few hours and went and had a bite to eat for breakfast, before we knew it, 11am arrived and I went back to get the painting and returned to MY PITCH!!!!! LOVE IT!
Rory flew in by Helicopter as he lived a fair drive from the golf course and boy did he make an entrance! the crowds went wild, Well he is there Latest SUPERSTAR!

He didnt get to the clubhouse / locker room for about an hour after landing, I was just about to pack up for the 2nd time to go and have a strole around the Golf Course when around the corner he walked, he headed straight to the locker room, stopped at my painting, told me it was amazing and signed it for me!!!

Darren Clarke I was told was in great demand by all the Media as he had pushed for the Irish Open to be held at his local club (Portrush) at this point I put the painting away again and went off for a beer & a glass of Wine with the Wife, We had a fabulous walk around with just a few light showers, nothing to bad though, eventually we decide to sit in the VIP Grandstand on the 18th Green, watching all the celebrties & Tour players who were playing in the PRO AM finish there rounds,
There were a few lively Characters, Bill Murray from the film CaddyShack, Martin oNeill (former Celtic manager) Pat Jennings, then the usual suspects Padraig, Graeme, John Daly, Olazabal – what an ovation he recieved, as all these players were finishing time was obviously ticking on and at 3.30pm I decided I would return to the locker room and hang around in hope that I would see DC when he had finished his round, 4.30pm arrived, no sign off him, 5.30pm arrived and still no sign off him,

at 6.15pm I had written off my changes off getting the 3 major winners signatures, then to my Relief 1 off the police officers whom I was having plenty of banter with had heard on his Raio that DC was heading to the Clubhouse but was mobbed by People like me looking for his signature, I stood and waited patiently and at approx 6.35pm DC arrived back near the Locker room, I was the only guy allowed in this area who was looking for his signature, he was heading to the media area so I had to take my painting AFTER HIM! and ask if he would be so kind as to sign it for me,

He did it!!!! the long wait Paid off, I had actually managed to get all the signatures on my Charity painting,

I was a happy Chappy, we packed up, went found & thanked Emma for her help and set of back toward Portrush Town Centre, we decided to go staright for a meal in a local Restaurant and who was in there having a meal, Padraig Harrington, what a fabulous day I had,

I would just like to thank my Wife Becky for Hanging around the course all day whilst I was hunting down THE 3 X NORTHERN IRISH MAJOR WINNERS!!!!!

WOULD YOU LIKE TO BUY IT!!!!! ITS FOR SALE, HIGHEST BID SO FAR IS £2500, I AM LOOKING TO ACHIEVE ALOT MORE FOR IT AS WE THINK ITS WORTH SO MUCH MORE ESPECIALLY WITH THE SIGNATURES 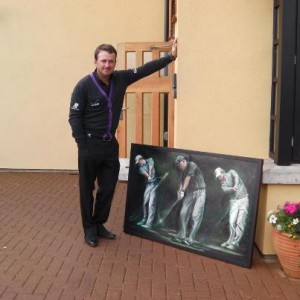